Each marine species possesses its own different requirements such as the quality of the water, the size of the tank, which other species it can be housed with or which other animals it may attack/be attacked by. This leads to complications, designing your aquarium around the different type of species you have, is always a difficult but rewarding task. The game, to make this easier, allows you to compare two different species to see if they will be able to be housed together, comparing if the species is a bully or a wimp, or if they are natural enemies, will help you create an authentic and varied aquarium. Creating ‘hidden areas’, in which only staff can enter to hide your equipment is a difficult task, there is no requirement for equipment to be hidden, but it makes for a nicer experience for your virtual guests.

If you are not careful, however, your ‘Hidden areas’, in which you store your filters, heaters, coolers and other tank necessities, can become messy and slapped together. For me, this was definitely the case and my staff areas were a complete mess, but the game doesn’t punish you for it, which is nice as a player who is not very good at these types of games. It was a sore sight, but the main visitor areas were made with love and care, so I did not mind too much, I just pretended like I did not see it. 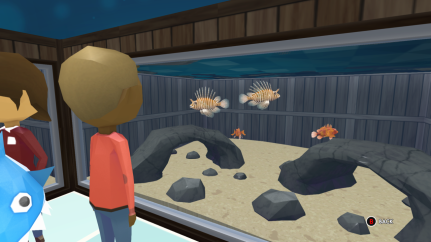 Marine species, like in real life, grow and the game does a great job of showing you how much room that a certain type of fish will take up within the tank, both when young and fully grown. If like me, you don’t do the math beforehand, you may find yourself selling more fish than you would like to when they get to full size, because you have not planned ahead and have made a tank hard to manage. The email system is my biggest complaint, it does what it needs to, shows you the information the game wants to show you. But, on Xbox specifically, I found it to be clunky and sometimes it showed me too much information. You can, filter your email for important emails, but since you manage your staff’s levels within your email, if you have a lot of staff, it can become full of level-ups quickly and take you out of the game mentally, when you see the load of work ahead of you. I suppose that makes it quite realistic to any management role, so maybe that’s why it is like it! 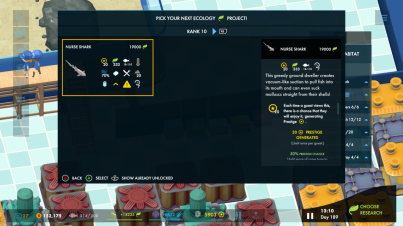 Unlocking new equipment/guest facilities and new species is done by earning Ecology points and science points, both numbers are determined by which species/decorations/plant life you have in the aquarium. Some will give you research points (Science/ecology) and others will give you experience points, which level you up. The higher the level, as you may have guessed, the bigger the fish, from small Dottybacks to giant Whale Sharks. The levelling system is done well, you never seem to run out of things to unlock or upgrade within your aquarium, which keeps you busy.

You also can manage your staff by teaching them new skills and allowing them to specialise in different areas. Do you need members of staff to focus on feeding alone? Then you can do that! And train them to be better, faster and more efficient when doing so. The same applies to many other staff required areas within your aquarium, such as cleaning, repairing and talks. Something that I did not take full advantage of was the ‘Zone’ system, in which you can set staff to stay in an area and look after a select amount of fish. It may have helped with the amount of staff that I employed, as once I found that they were being overworked, instead of sorting out their workloads, I would just hire more staff!

The game’s design is very simplistic, focusing instead on the marine species and the management side of things when running your aquarium. However, because the design is simplistic, it does not mean that you cannot make interesting looking displays, but you are limited to how many decorations are in the game, which there is only a handful. So if you are not careful, you aquariums exhibits, can tend to look very similar throughout your playthrough.

The game does, at least for me, suffer from some performance issues. Only on the last scenario, where your aquarium, must start from basic small fish and work up to the grand goal of a Whale Shark. When the game has a lot happening on its screen, it lags, quite a bit. Which is a troubling situation for a management game where you would like to build your dream aquarium, that will probably be huge!

Overall, I enjoyed my experience with Megaquarium, it was fun trying to put all the right species together, whilst managing my guest’s needs. It felt like a nice introduction into a genre of games that I always felt I was bad at, I probably still am, but Megaquarium has given me a little bit of hope, for my future in management style games. It would be interesting to see if the game would get any updates, maybe a decorations pack or a new species pack, because whilst I think the base game was fun, it would bring me back to explore the new additions.

The game is only around £19.99 and available for all consoles and PC. I played it for quite a few hours (20-25 hours), so for me, it was definitely worth it. If you love marine animals or enjoy management games, Megaquarium would be right up your alley!